Throughout almost two decades in Vietnam, NashTech has always striven to become a go-to destination and nurture the growth of thousands of employees. Because for us, our Talent are extremely important and they are our most valuable assets.

With this motto, NashTech organizes an annual award, titled ‘Employee Of The Year’, to express our gratitude and appreciation towards our talent. This year, six Nashers have been honored as ‘Software Engineer of the Year’ and with this first article of the series, let’s explore the two inspiring stories about Ms. Tien Diep and Mr. Phuoc Van throughout their journeys at NashTech.

Tien Diep – What doesn’t kill you, make you stronger! 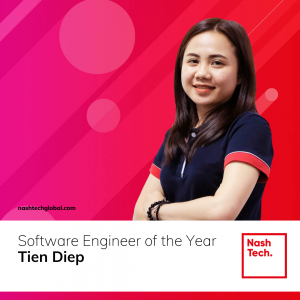 Tien Diep is currently working as a Senior Software Engineer at NashTech. With passion for beauty and the goal of creating beautiful displays, Tien has chosen to follow the path of being a Frontend Developer, where she can design and deliver splendid yet friendly websites.

Since the day Tien joined the company in 2018, NashTech has given her opportunities to learn, to grow, to develop not only technical but also soft skills. During these two years, although Tien has faced many challenges and tough times, but after overcoming these, she said: “What doesn’t kill you, make you stronger!”

Tien recalled one of the most bittersweet memories while working with NashTech. It occurred during the last months of 2019 when the Southeast Asian Games 2019 was being held. During that time, Tien’s team had to work overtime frequently to meet the deadlines for an important client. And during the night that Vietnam were victorious in the football final, Tien and her teammates were in the office, working until midnight while the whole country was celebrating. Watching people flocking onto the streets with national flags, hearing the crowd making cheerful noise while she was still chasing deadlines made her become emotional. However, she said that looking back at those hard times, it helped her becoming stronger than ever and now no barrier can stop her!

Sharing her feelings when she received this ‘Employee Of The Year’ title, Tien had told us a funny story about it. She shared that the morning she received the email about the nomination for this title, at first, she had ignored it and started her working day as usual, thinking it was just a companywide email. But later, knowing that she must have missed something, Tien mingled around the office, asking if there was anyone who had received the same message. After realizing that it wasn’t a bulk email, it made Tien felt ecstatic and blissful since her hard work and dedication is finally paying off and has been acknowledged by the company. It was surely an unforgettable memory for Tien and a worthy reward for her dedication. 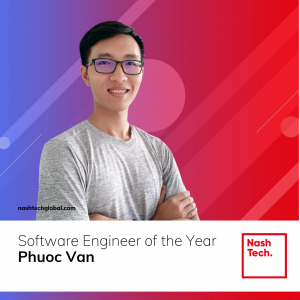 Joining the company right after graduation, Phuoc Van has enjoyed a remarkable journey with nearly 5 years of experience in being a Nasher. Currently at NashTech, he is a Senior Software Engineer working with a competence of Full-stack NodeJS, which is usually joked as “full-stuck”. His hobbies include music (but he doesn’t know how to play musical instruments) and badminton. He usually spends time playing badminton after working hours and during the weekend to relax.

Sharing his journey with NashTech, Phuoc said becoming a Nasher right after graduation is a fascinating yet a bit thrilling experience for a fresher. However, looking back after 5 years, Phuoc said it was definitely a fortunate opportunity since at NashTech employees are given a nurturing and supportive environment that helps you to grow personally and professionally. You can barely find any other company that embraces employees’ growth the way NashTech does.

During 5 years of working at NashTech, Phuoc has been lucky to have the opportunity to experience a wide range of job roles. He shared that each year, he had the chance to work and learn in a different competency. For example, he was a Java Developer when he first joined the company. Later, he became a PHP Developer. After more than a year working at that position, he shifted to become a Frontend Developer and lastly, Full-stack NodeJS, which is his current role. Though it was challenging, it is a rare opportunity that not everyone can have a chance to experience.

During our talk, Phuoc also shared some tips on how to deal with deadlines. He said that any task or project will have their own deadlines and a manager of Phuoc gave him a great piece of advice. It was: “Everything can be negotiated if it is reasonable”. Following this “motto” has helped Phuoc meet many relentless deadlines although he also emphasized that it doesn’t mean that you can ramp down the commitment or procrastinate.

Besides being a Senior Software Engineer, Phuoc is also an energetic member of NashTech’s Badminton Club, and he usually joins the company’s internal tournament. He shared that badminton could help him relax during stressful periods. By releasing your mind with exercises, you can get back on track with more energy and motivation.

NashTech can grow so successfully today thanks to our amazing people, who are fondly called Nashers. Each person is a unique colour that contributes to the vibrant spectrum of NashTech. It’s great to have these two Nashers whose dedication was acknowledged and appreciated by the title ‘Employee Of The Year’. We would like to extend our sincere congratulations to them and hope that Tien Diep and Phuoc Van will continue to achieve many more milestones in their future career.